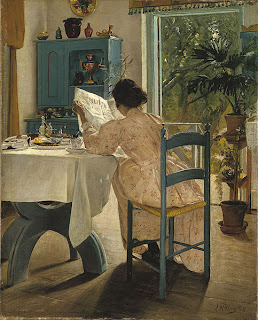 
The Better Angels of Our Natures is one of the years ten best books according to Library Journal.  It is excellent writing mixed with superb analysis. http://reviews.libraryjournal.com/2011/11/best-of/top-10/best-books-2011-the-top-ten/

I read a little bit more of The Better Angels of Our Natures.  The author is describing what he calls the rights revolution.  He is describing how because people are more focused on civil rights and womens rights there is less domestic violence and ethnic violence.  Steven Pinker backs all his statements with statistics covering different time periods and amounts of violence.

I also took some time to look at grants.Library Grants Blog -- http://librarygrants.blogspot.com/
and Scholastic Library Grants -- http://www.scholastic.com/librarians/programs/grants.htm  list quite a few grants for libraries.  There are a few things which we apply for each year.

I also put the book The Collapse of American Criminal Justice by William J. Stuntz on hold.  I also spent half an hour on Lynda.com learning Microsoft Powerpoint 2010.


First They Came for the Library...
http://urbanlibrariansunite.org/?q=node%2F9
This is an Advocacy Group for libraries that is tied in with social media. It is in New York.

This is also posted on The Desk Set blog.
http://thedeskset.org/first-they-came-for-the-library/

There is another hashtag on Twitter, this time it is OWS Bookmobile
https://twitter.com/#!/search/%23owsbookmobile

Wikipedia Article for the People's Library-- of course it is not neutral.... but then ...
http://en.wikipedia.org/wiki/The_People%27s_Library

There is even a link to an Al-Jazeera article on the library which seems to be an almost novelty in the Wikipedia entry.  I am really not sure what to think of this.

The People's Library and the Future of Occupy Wall Street
http://www.webcitation.org/63JEusc69

There is another side to this story which is not being covered that much.  If you are interested in information, the laptops supporting the Occupy Wall Street movement were being supplied by 2600 which is a very distinct hacker group.  Most of the laptops in New York were destroyed in the raid as well as the most of the library.

This shows a willingness to destroy things and it makes me keenly aware that it is not that physically safe to be around the Occupy Wall Street protests at some points. The violence seems to escalate at night.

Posted by Book Calendar at 9:32 AM