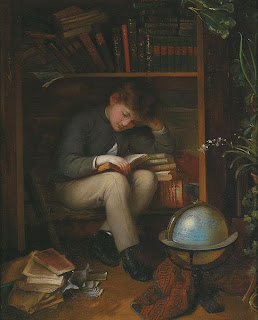 I read some more of The Better Angels of Our Natures.  Steven Pinker is describing why democracies have less wars and why trade also reduces the amount of warfare globally.

The book Spontaneous Happiness by Andrew Weil, MD came in for me to read.  I like the style of his writing.

Last night, I finished reading The Death Ray by Daniel Clowes.  There is a certain darkness to the tale.  A man gets superpowers because he smokes cigarettes.  He also has a death ray gun given to him by his father which he uses to dispose of the men who cheated on his wife.  It successfully satirizes the superhero genre and makes it seem very ordinary.  I enjoyed reading it.  One of my colleagues is reading it right now.   She likes the copyright page.

This morning, I updated the Facebook and Twitter accounts.  We also got our first check from Better World Books which is nice.  I also checked the displays.  One of my colleagues has a display of holiday books up.

We have the Mount Vernon Writers Network today from 6:00 p.m. to 8:00 p.m..  It will be in Aisle 7 instead of the rotunda.  We are each writing a poem about veterans.  We mostly discussed the incorporation of the group into a nonprofit organization, publicity, and setting up a logo.  At the end several people read poems about veterans.

I read a bit more of  The Better Angels of Our Natures. Steven Pinker is describing how governments killed many more people with democide (systematic killing of citizens by government forces) and genocide during the 20th century than with war.

ALA Alarmed at Seizure of Occupy Wall Street Library
http://ala.org/ala/newspresscenter/news/pr.cfm?id=8568

Peoples Library at the Brooklyn Bridge -- It is in Push Carts
http://peopleslibrary.files.wordpress.com/2011/11/dscn29781.jpg
There is something existentially satirical about this picture.

Posted by Book Calendar at 9:18 AM