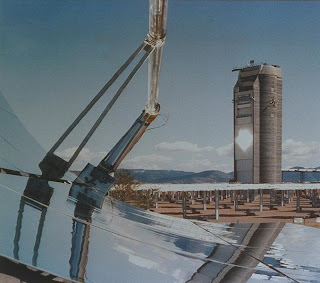 Apollo's Fire Igniting America's Clean Energy Economy by Jay Inslee and Bracken Hendricks, Foreword by President Bill Clinton is a very political left leaning book. It is an energy plan to change the economic base of the United States to more renewable energy. The book is very big government oriented. When I read the book, I had to wade through a lot of rhetoric and political jargon. This book compares a large scale energy plan to the Apollo Project which sent man to the moon. They sound the alarm on global warming, petropolitics, and national security.

In the opening chapters, the story of Felix Kramer who created the first plug in electric hybrid with $700 worth of nickel hydride batteries is told. Austin Energy is already selling conversion kits to turn hybrid electric cars into plug in hybrid cars. Although, the story is not in the book, the story of http://www.greasecar.com/ which provides kits to convert diesel engines to run on vegetable oil is very similar. This is of course a very inspiring story.

They then describe how we can encourage the big three automakers to convert to mass producing plug in hybrid electric vehicles. This is not very convincing. General Motors killed both the EV-1 electric car and the multi-fuel turbine car. The Volt is the planned plug in hybrid of General Motors. The authors did mention Tesla Motors http://www.teslamotors.com/ which is producing a high end $92,000 electric sportscar and plans on producing an all electric sedan for $50,000. Supposedly the government should buy lots of plug in hybrids, this will supposedly encourage people to buy more plug in hybrids. Also they mention Senator Obama's "Healthcare for Hybrids" plan to retool America's auto factories. I really didn't get how it was supposed to work. I wish the authors had instead discussed how we should encourage more innovation inside the country to create a more competitive automobile market for alternative cars.

The section on solar energy is not very convincing. Solar energy is very expensive and we are far behind Japan and Germany. Investing in photovoltaics seems like a long term project. It is at the end of the chapter where things get interesting. Solar turbine technology in large installations has grid parity in pricing with non-renewable energy. It is just getting off the ground. Solar concentrators also seem to be much more affordable than photovoltaics.

A central idea of this book is that the United States should revitalize our economy by investing in "Green Collar" jobs in every community. The environmental industry is worth $341 billion dollars and provides 5.3 million jobs. I am interested in knowing which sectors of the economy exactly are part of the environmental industry. This is not explained completely. "Green Collar" jobs are high technology jobs focused on energy efficiency, clean energy, green buildings, mass transit, and clean cars. This is essential to jump start our economy for the 21st century. Part of this is investing in massive Hoover Dam style projects like rebuilding the energy grid along more distributed lines and building lots of new clean light rail mass transit.

After talking about "Green Collar" jobs the book reveals an interesting plan for farmers. There are some dubious qualities about it. Biofuels are going to jump start the heartland. Greys Harbor, Washington where Imperium Renewables has set up a clean biodiesel plant is trumpeted as the town of the future. We get a picture of where first farmers build biofuel plants, then they invest in wind turbines to sell wind energy, then they convert their farm machinery to biodiesel, then they invest in solid waste digester for manure to produce methanol and fertilizer. A kind of clean energy farm for the future.

The main dubious idea is that corn ethanol is good and that cellulosic ethanol is the fuel of the future. Ethanol will never be completely oil free, it is blended with gasoline. There are also only 378 E85 ethanol pumps in the country. The United States can't even get a blending standard of 10% ethanol in all gasoline passed. The idea that somehow we will force the big oil companies to install massive amounts of E85 pumps is very far fetched.

This is one of the reasons I am a big fan of biodiesel. Biodiesel can be pumped from any regular diesel pump which is available at a gas station. There is no need for a new biodiesel infrastructure, it can simply be expanded. It is also the fastest growing of the alternative fuels. Diesel engines were originally designed to run on peanut oil.

Biodiesel is growing very fast because centralized fleets of heavy diesel equipment can simply switch the fuel they are using to biodiesel easily. It also provides less wear and tear on engines and burns cleaner than regular diesel. Also, biodiesel was recently used to power a jet plane. We can keep our aircraft if we use biodiesel. http://www.greenflightinternational.com/

The next section is on wind energy. Wind Energy is the first truly profitable renewable energy source. The breakthrough in making wind energy profitable is when research started working on creating tidal turbines for the ocean. The blades and engines of tidal turbines could handle far more torque than regular wind mills. This design allowed the creation of 2.5 megawatt 200 foot tall wind turbines like the ones produced by the Clipper company. One of these turbines can power 800 homes. Tidal energy of course is fascinating. Although, it isn't mentioned in the book, Finavera is opening the first tidal power plant in alliance with PG&E on the United States west coast in 2012. According to the book tidal power could provide potentially between 8-20% of our energy and wind could provide 20% of the United States energy. If they are going to talk about tidal and wind energy, why don't they talk about distributed hydroelectric. There is nothing in this book about improving hydroelectric energy which is the largest portion of renewable energy used by the United States.

Coal energy and nuclear are discussed. Clean coal which is a process of capturing carbon and sequestering it in the ground is described. What is missing from the description is the idea of cofiring coal with biomass to reduce emissions. There is a little bit of discussion of GreenFuel Technologies at MIT, but it does not have much detail on using algae to scrub CO2 from coal plants. http://www.greenfuelonline.com/ . Sequestration is a good idea, but reducing emissions at the source seems to me to be a better idea. The description of nuclear energy here is at best cursory. It describes how nuclear energy is completely unsafe. Coal represents 50% of the United States utility use.

The final chapters are a summary of what needs to be done. The Apollo Alliance combines a coaltion of labor, environmentalists, businesses, and community based organizations. It aims to create "Green Collar" jobs and improve the environment. They have proposed a five point plan to change the United States economy.
1) Increase energy efficiency with green manufacturing of appliances, lighting, and transportation, improve conservation, and build green buildings.
2) Reduce reliance on oil by increasing mileage standards for vehicles, introducing biofuels, and plug in hybrid electric vehicles.
3) Reward renewables and carbon free electricity. They suggest a 25% renewable portfolio standard for utilities by the year 2025. This is a pretty steep expectation.
4)Build cities that are more dense and green with light rail, an improved distributed energy grid, and more green buildings.
5)Put carbon caps in place. They suggest a carbon tax. This will not be very popular with most businesses. The other option they suggest is a cap and trade system where carbon emissions are given a specific value. This is much more likely to inspire innovation, but will still leave some rampant polluters.

The problem with this whole idea is the cost. This will cost $300 billion dollars, $30 billion dollars per year for ten years. The legislation was tried in 2005, but it didn't even make it to vote. http://www.grist.org/comments/soapbox/2005/05/18/inslee-apollo/index.html .

The ideas in this book need to be brought down to earth and made into a more manageable form. There is a lot of dreaming and political rhetoric and not enough hard nuts and bolts solutions. The five proposals of the Apollo Alliance seem to cross party lines and pieces of them could be implemented. There are a lot of very interesting ideas in this book. Because of its very liberal slant, it might be a hard read for libertarians or republicans.

Posted by Book Calendar at 2:44 AM

I have posted new story: The Great Orchestra of Christmas Charity. Wielka Orkiestra Świątecznej Pomocy. /Version polish and english/ - WOŚP - Wielka Orkiestra Świątecznej Pomocy - The Great Orchestra of Christmas Charity is the biggest and most prosperous charity organization in Poland ; more :
http://himalman.wordpress.com/2008/01/10/the-great-orchestra-of-christmas-charity-wielka-orkiestra-swiatecznej-pomocy-version-polish-and-english/ ;
Please copy and paste this post on your site. This is very important for me !! Have a fabulous weekend!! -himalman :)
Have a nice day! - himalman :)

Himalman, I couldn't get your link to work. I would put it up as part of a comment if the link worked.

Shell, I can't get your link to work either.

Try and keep your links short or they tend to die in blogs.

I really like that your blog covers so many subjects.

It does, but most of them eventually come out of books. I kind of think a lot of subjects are very related. The latest review took quite a bit of thought.

Thanks for coming over to visit my blog and for your nice comment about my tastefulness!! You are very kind!! :)

Your blog is very interesting, too; I thought it was only I who enjoyed the delightful and intriquing romance of the library stacks! I'll have to check out some of your recommended selections.

May you find a signed, leather-bound first-edition where you least expect it,