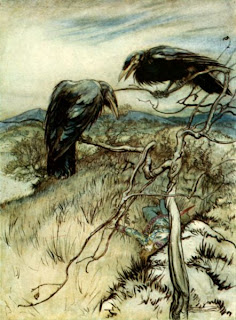 The Book of Ballads , Charles Vess Illustrator, with Neil Gaiman, Charles De Lint, Jane Yolen, Jeff Smith, Emma Bull, Sharyn McCrumb and others is a collection of ballads translated into graphic stories. First the ballad is illustrated in comic book form, then it is written out as a poem. The ballads are of English, Irish, and Scottish origin and have a wonderful fanciful quality to them.

All of the illustrations are by Charles Vess. Vess has a beautiful black and white illustrative style. The style reminds me of a cross between P. Craig Russell and Hal Foster. There are hints of Virgil Finlay in the use of light and dark, and Aubrey Beardsley in the use of lines and some of the sensuality of the images. Charles Vess runs Greenman Press http://www.greenmanpress.com/

The book is a real delight to look at. Each ballad is scripted differently by each writer. There are 13 ballads. I will list them. The False Knight on the Road by Neil Gaiman, King Henry by Jane Yolen, Thomas the Rhymer by Sharyn McCrumb, Barbara Allen by Midori Snyder, The Three Lovers by Lee Smith, Tam Lin by Elaine Lee, The Daemon Lover by Delia Sherman, Two Corbies by Charles De Lint, Sovay by Charles De Lint, The Galtee Farmer by Jeff Smith, Alison Gross by Charles Vess, The Black Fox by Emma Bull, and The Great Selchie of Sule Kerry by Jane Yolen.

The contributors are some of the finest fantasy writers of myth fantasy around. Most of them take traditional myths and legends and translate them into fantasy novels.

I especially liked three of them. Thomas the Rhymer travels to Elfland with their queen where for seven years he remains silent and serves her in exchange for the gift of truth and site. He can predict the truth of what will happen to people.

Tam Lin is told differently than the other tales. It consists of one page of dialogue translated into modern english juxtaposed next to a single picture on the next page. It is quite striking to look at.

The Great Selchie of Sole Kerry by Jane Yolen is a classic fairy story of what happens when a mortal woman lays down with with a fae creature. It is tragic both for her husband son.

All of the stories have an air of magic, revenge, or trickery about them. Many are about fairy creatures and places. The ballads content is often bloodier, trickier, and more beautiful than many modern fantasy novels.

This graphic collection is an excellent read if you are interested in myth fantasy, folklore, legends, or fairytales. It will introduce you to a number of authors who write in these genres. It might not quite fit with people who like regular tales of sword and sorcery.

Posted by Book Calendar at 9:47 AM