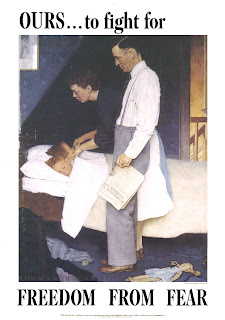 This is an image published by the United States Office of War Information, it is a government document in the public domain.

Once Upon A Town The Miracle of North Platte Canteen by Bob Greene, (William Morrow, c2002), is a story about patriotism on the homefront in the United States during World War II. It evokes a historical past where duty, honor, and country are embodied in a wholesome sense of self-sacrifice.

The image of North Platte is one of Rockwellian small town America, with wholesome people small shops, an all American railroad, and a patriotic population. The story centers on the creation of a free railroad canteen for soldiers passing through central Nebraska on their way to the war front.

The wives and daughters of the town met the soldiers at the station and gave out free farm fresh food, candy, papers, and provided pen pals for lonely soldiers departing to the front. They provided a brief moment of hospitality which many soldiers remembered for the rest of their lives.

Bob Greene compiles letters, newspaper clippings, and personal accounts of the soldiers passing through as well as the women who volunteered at the canteen. The letters are mostly personal thank you letters to the volunteers. This book tells a lot about what it means to be grateful. Some of the soldiers fall in love and marry women from the town.

It is also a story of change. The railroads no longer carry passenger trains through North Platte. North Platte is the largest switching yard for commercial train traffic in the United States with some 12.000 trains per day passing through it. There is no longer a downtown, only a large big box Walmart, where the canteen stood, there is a flag and a plaque and a yard full of vagrants.

The people in the story are part of a "vanishing America". Most of the people interviewed are in their seventies and eighties. It also pictures an America where people sacrificed for higher ideals. They gave what they had to for "our boys". There are no pictures in this book. Yet, the images while you are reading come to mind things like the flag, softball, the farmers daughter, pie, and the rolling green hills of Nebraska. It reminds us that there are patriotic values worth sacrificing for.

It is the once upon a time mythical America where things are true, stalwart, and free. This book would be a very good choice for people who like a clean heartwarming story.

The book itself is interesting, it is a five inch by eight inch hardcover. It is very easy to read.

Posted by Book Calendar at 7:31 PM

This is a powerful story and well worth telling. It is a soul satisfying read. There is another book coming out called ANGELS AT THE STATION but Ohio author Scott D. Trostel that is even more powerful in telling the humanitarian story of several WW II canteens as well as the many vo0lunteers and their sacrifices in the name of strangers in uniform. Trostel as written four other books about WW II canteens. All are a must read!