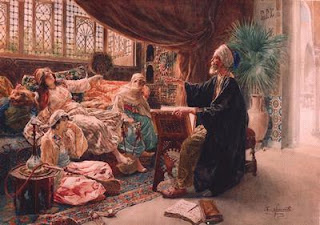 Scheherezade Goes West, Different Cultures Different Harems by Fatema Mernissi. For me reading Fatema Mernissi is like stepping off into a far distant exotic land. This is the first book which I have read by her, but her titles include The Veil and the Male Elite, Islam and Democracy, Tales of a Harem Girlhood, and Forgotten Queens of Islam.

She is something which I find truly different, an Islamic feminist who is a professor of sociology at the Mohammed V University in Morocco. Her writing is very scholarly, but not on subjects which I have read about. A lot of it concerns the early history of the caliphates, the mughals, the turks, and European Arab relations.

This book compares the imaginary harem in western art of 18th and 19th century Europe, often called Orientalist Art, and the real muslim harem in history. It is very intriguing. The book is peppered with references to historical and mythical figures in Islam like Scheherezade and the mughal princess Nur-Jahan who was famous for hunting tigers.

The muslim harem of history is very different than one presented in the west. Most of the women there are prisoners often captured as slaves. The only way most of the women can be recognized by the men who own them is through exceptional artistic or intellectual skills. Rich and powerful men would pay huge sums for women who could sing, dance, recite poetry, play chess, or demonstrate capability in the intellectual arts. The only way for many of these women to escape slavery was to become pregnant which would make them officially free. This seems like a strange dichotomy to westerners. It is nothing like the odalisque paintings of the 19th century.

Inside the harem of the Middle East there is also a very different set of rituals going on. The picture she paints is of the rich despot or merchant drinking wine in private, looking at small miniature Persian paintings, and listening to women sing and dance. She idealizes the muslim caliphate as a kind of cosmopolitan world where people like the vizier Harun Ar Rachid rules.

Most Orientalist paintings are of fleshy alabaster skinned blond or black tressed women with big buttocks, the kind of pictures you might look at if you were taking an art class in college. They look nothing like most middle easterners I have seen. They are Victorian European ideals of beauty which seem mildly grotesque in some cases to a modern American.

She claims there is a dichotomy where western women are expected to feel but not think and conform to a perfect body image. In her experience in the west, women are made to diet and starve themselves to fit in. In the arab world they are held in place by the veil and the harem, locked into an enclosed space.

Mernissi's grandmother who spent her whole life in a harem told her that to travel was to be free. To open herself to foreign ideas and thought lead one to deeper insight about the world. The story of Scheherezade is about how a woman uses her mind to overcome the madness of a dangerous caliph. It is also one of the great fairyales, the Thousand And One Nights. It is about travelling to exotic far away places through fairytales. Only through the eroticism of the mind can Scheherezade save herself.

The book itself is set in multiple locales, Paris, France, New York, Morocco. Not only does it travel in the physical world. It travels in the world of history weaving in and out of the Mughal dynasty, the caliphates, and 19th century Victorian France.

I really enjoyed reading this book. It took me to many places I had never been before and introduced me to ideas I had never thought about.