The Ebony Horse, Ali Baba And The 40 Thieves, Thoughts on Blogging 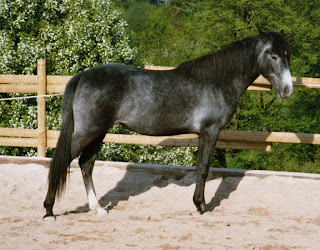 I was reading the Ebony Horse, a story in the Arabian Nights. I have the paperback right now in front of me. It is the Richard Burton verson. I found the story to be surprising because it is the classic science fiction gimmick story, where you have a special device or machine that allows you to do a unique thing. In this case it is a horse which looks like ebony. If you press one button it ascends into the air, if you press another button, it descends to the ground. It is even described as having an internal mechanism or motor. This object is what allows the story to happen. At one point, the hero of the story, the prince even lands it on top of a palace roof. This is one of the oldest gimmick stories I have seen. Maybe the Goose that Laid the Golden Egg is another gimmick story.
Another story from the Arabian Nights which has an intriguing piece in it is Ali Baba and the Forty Thieves. Morgiana Ali Baba's servant boils alive 38 thieves in oil. They meant to kill Ali Baba. What is intriguing about this, is this is not the kind of thing a modern hero can do. I don't think it would be possible for Harry Potter, Batman, or Nancy Drew to get away with boiling people then putting them in a hidden mass grave. In modern stories, the hero is supposed to do the action. Morgiana is his servant, eventually to become the wife of Ali Baba's cousin. Morgiana does a lot of the things which save Ali Baba.

I have gotten various requests to do things with my blog. Add a comments section to the blog, change the format so Entrecard is higher up on the screen, add a third column. The add a third column has been the hardest part for me. I haven't found a decent tutorial that tells me how to do this easily. It would be very useful if someone pointed out a decent tutorial for me.

I tried to read More Than Human by Theodore Sturgeon. I couldn't get past the first three pages. I guess my tastes have changed. I really liked reading it a long time ago. It is considered to be one of the best science fiction stories ever written. I find my taste has changed in reading. Maybe, it is because I want to read something newer with a more modern perspective. I have been focused on reading books which have just come out.

There have been suggestions for books to read. I have put them on reserve at the library. Even for a librarian this is a tricky proposition. Our library is part of a library cooperative, not a system, this means every library has its own rules and we share resources. So, each library kind of does its own thing and it is hard to know how fast they are going to act with interlibrary loans.

I am waiting for the books I put on hold, Wind Follower, and Oil. I could call the other libraries and demand "Why hasn't my book come? You must send my book. Please check the shelves." I might do it in a week or so. But, I have to be careful to maintain goodwill. Librarians can get pretty cranky about these things.

There is the possibility that the books are lost, stolen, or misplaced, or just taken out then returned with checkout. Some customers (library patrons) like to read their books in the library, so they find special places to put their books so they can come back and read them every day without other people taking them out. Often these are books with a lot of demand on them. Holds are often about patience. Because, I am already in the building, I can wait for my holds. I, like everybody else have to wait for the books I want quite often.

In order to get items to read, I put a bunch of books or movies on hold, maybe about ten of them, then expect I will get three or four in the next week, and the majority of them much later, some of course will not show up at all.

Posted by Book Calendar at 3:55 AM

HI! Cool Blog!:-) THanks for adding me as friend..

The library I work for is part of a large county wide system and imho it has done a great job of making the resources and materials of all 17 of our branches available to all of our patrons. (Our books are constantly on our trucks moving around the county to where they are requested.)

In my experience Interlibrary loans from other systems are Always iffy. I've had requests for a book from a neighboring county canceled without explanation and had books requeste from across country in my hand in less than a week. Always worth a try but you never know what you will get.

We do a pretty good job most of the time. However, we really are not a system. Each city has a separate budget for every library in the cooperative. It is more of a resource sharing network. Things are not uniform between libraries, they are not branches. Basiclly we share a common catalog, some electronic resources, training, and interlibrary loan. But the different libraries vary wildly in almost every aspect. We are paying fees to a central place for these services. They call the central processing center the system, but it is nothing like the systems in Brooklyn, Manhattan or Queens which are very uniform in almost all aspects. There are some interesting politics because of this.