I am Legend-- Richard Matheson-- Review 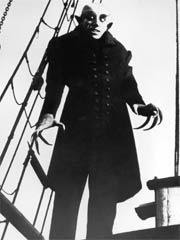 Count Orlock from the movie Nosferatu (1922)

I am Legend by Richard Matheson is a classic vampire novel. The version I am reading is c1995, it was originally c1954, Richard Matheson renewed the copyright. There are also several short stories included with this version. I am going to focus on the story "I am Legend."
I have read it several times. It has a very different feel from when I first read the horror novel. I think the novel is really written for someone in their late twenties. It had a lot more impact for me then.

The darkness wasn't there for me this time. It was more of a description of a horrible experience for the main character, Robert Neville. The story is more about the main character than the vampires. The world has pretty much ended for the human race. A terrible plague has spread across the world turning the population of humans into the undead.
Robert Neville is the last man on earth. He survives by living in a world fortified against the vampires outside.

Every day he goes out and stakes the living dead around his property. For me this no longer scary because they are just dead bodies to be searched for. We also learn because of a plot device he is immune to the vampires bite. One time he had been bitten by a vampire bat while he was in the army. This is an entertaining gimmick more than anything else. It lalso means he can be bitten and torn at without turning into a vampire.

The dog dies in the novel, apparently, the dog doesn't die in the movie starring Wil Smith. An interesting note about the book is that the character is a tall, muscular, blue eyed, blond haired man. But, this doesn't matter because as you are reading the novel, you can see the character as an every man. The main characters physical description seems incidental.

I've also read quite a few more vampire and zombie novels. The plot by this time has spread to numerous other novels and films. World War Z by Max Brooks is another story about a horrible plague, this time it is not vampires but zombies. Also, 28 Days, the film is about a plague that turns people into raving killers. The vampire as plague story started with this novel. The novel was very original for its time.

The vampire as plague is an interesting idea. I rather like how the book ends. This is a spoiler. Survivors who have come up with a partial cure find Robert Neville and execute him. He is a legend, the last man of the old earth. I am sure this is nothing like the new Wil Smith film even if I haven't seen it. I did see the Omega Man, an earlier version of I am Legend on the screen. In the Omega Man, Robert Neville finds a cure for the plague. I like the partial cure idea, it is much scarier and more grotesque.

I like how Robert Neville survives. He listens to classical music and he drinks. If you read carefully, you realize some of the music being described is atonal classical music. It is meant to disrupt ones emotions. The liquor he drinks is strong, scotch mainly. Scotch is a pretty sophisticaed drink

The library is of course a central motif of the book. Robert Neville searches the library, now covered with dust for books on physiology and the circulatory system. The author uses the books as a plot device to explain how the plague spread.

Robert Neville ponders the plague and the classical vampire motifs, garlic, the cross, running water, stakes, immunity to bullets. The author doesn't fully explain how or why these things work completely. He does give just enough to tantalize you, but not enough to finish the complete idea.

For a vampire novel, the writing is quite complex. It has a very detailed quality to it and misses very little of what is important. It is clear when reading the novel, the author thought things through very carefully when he wrote the novel. It is detailed enough that he gives specific dates for when things happened, chemical descriptions, and percentages. These of course aren't that important because the novel could just as well have been set today as thirty years ago. Yet, they do give a finished feeling to the writing.
Stephen King and many horror writers consider this novel to be one of the top horror stories ever written. The novel is short only 170 pages long allowing one to read it in one sitting.

There is an element of unbelievability to the novel. The author even comments that he doesn't understand why the vampires with a tiny bit of intelligence don't just burn the main characters house down to get rid of him. They throw stones at his house. But, then the novel would end. He has to be caught as an individual for the novel to end.
I am wondering what the sound track of I am Legend will be like. I hope they include some decent piano music.
I remember watching Nosferatu in the park on a summer evening at around six o'clock. You paid for your ticket and sat outside. Maybe you got a glass of beer or soda, or some popcorn. Then the piano would start playing. The film was a silent black and white with a slightly grainy texture. Nosferatu had a dreamlike quality much like animation. Everything was either very dark or very light. The whole movie was a movie of extremes.

I am reviewing this book particularly because the movie is in the theater. I am not going to go see the movie in the theater. I will wait until it comes out on DVD. When it comes to the library, I will put it on reserve. I will probably end up being number 250 in line and have to wait three months to get the movie. I am in no hurry to get movies, books, and other media. I don't feel an urge to rush out to get things. I think this is much more satisfying when you are younger. There is an excitement to be the first one to see a movie. You get wide eyed and rush out to see the latest thing, or grab the newest comic book. It is a very intense experience.
I also have Spiderman 3 and Shrek The Third on hold. I rather like these kinds of films. Like, I am Legend, I am not in a hurry to get things. I follow the same habit of some of my patrons. I fill up my holds list and keep it filled. There is one patron of the library who comes in and first fills his hold list of 20 films, then he uses his mothers card to add another 20 films. He is disabled. It is what he does with his time. There are a couple others like this who fill all their holds with videos.
In a way, I am just as obsessed, however, I have a little more variety, books, dvds, and comic books. I usually get a few items every couple days.

It's a long time since I read this, but it really is a smashing, engrossing read. I haven't watched the film because I don't want to 'spoil' the book, which might be weird, but it makes sense to me on some level. The idea of how he becomes legend is brilliant.

It does not make sense on some level. Dune, the movie was fantastically awful compared to the book.

However, a movie never truly follows a book because it is a different medium. Understanding how the film medium works helps create a separation between film and book.

Excellent review! Not at all a vampire fan (always enjoyed Buffy though), but was blown away by The Historian by Elizabeth Kostova. Astonishing first novel, and a treatment of the vampire legend that actually had some credibility (some, literary) and made me wonder who would star in the television mini-series (way too dense for a 2-hr. film). Thanks. --mudge who writes (but not nearly as well as you) at http://mudge.essoenn.com

One to add to my list.
It is interesting the film / book concept. I recently saw Golden Compass which I really enjoyed on the cinema, the Philip Pullman books had totally missed my radar, so I have started reading them and in this case I can see in my minds eye the characters and the story (& see the differences) by seeing the film first. It was not the case when I watched Charlotte Gray - Sebastian Faulkes (my very fav author) the film was not good where as the book was exquiste... hey they even changed the ending in the film (when I got home I had to re read the last few chapters to be sure I wasn't imagining it!!!!!)

The idea of the Historian was engrossing but more than a little odd. Forcing someone to serve as a kind of vampires surrogate to rewrite legends of the past.

Great Post!
I've not watch this movie but I'll try to find to see if I can find this movie on VCD/DVD.
I love black & white classic movies!
Have a good week!