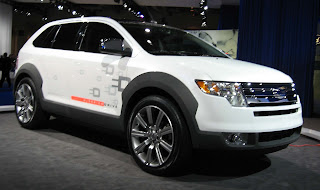 Freedom From Oil How The Next President Can End The United States Oil Addiction by David Sandalow, Introduction by U.S. Senator Richard G. Lugar. This book presents what looks like a bipartisan solution to helping end the United States dependence on oil. The book is about how the United States can diversify its transportation sector away from oil to other sources like electricity and biofuels. The book largely consists of memorandums between a fictitious president and his different advisors. At first, when I read this, I thought "oh no", a book about committee meetings between a politician and his staff. But, luckily it turned out to not be so dull.

There is a lot of material covered in this book. Some of it is surprising. Each chapter has a guest cameo. General Richard Zilmer talks about how it is necessary to introduce solar and wind power in the military to reduce the need for vulnerable fuel convoys, Chelsea Sexton who starred in Who Killed The Electric Car talks about the need for electric cars. There are a lot of interesting cameos.

96% of the United States transportation sector relies on oil. The majority of this oil comes from the Middle East and countries unfriendly to the United States like Venezuela. The political costs of this oil are high, vulnerability to attack on oil fields by terrorists, problems sanctioning Iran, going to war with Iraq, being dependent on non-democratic countries like Saudia Arabia, global warming, dwindling suppies, and pollution. The costs are described in plain language.

The book itself is divided into three sections, problems, solutions, and decisions. In the problems section, David Sandalow describes how every president since Nixon has tried on some level to reduce dependence on foreign oil and failed. Taxes on oil and gas are practically unpassable as legislation. So is breaking the pork barrel politics which hands out benefits to oil and gas companies. Yet, the next president has to do this according to Mr. Sandalow.

There is also some material on the intransigence of the car companies in relation to change. There is a culture built around the internal combustion engine and big powerful race car fantasies.

The section on solutions is very interesting. I don't agree with him on many points, but he is talking about real things which can be done which is more than most politicians are doing. The main focus of the book seems to be getting millions of plug in hybrid electric vehicles on the road with a combination of tax incentives for individuals and incentives for American companies to retool factories so we can produce better cars. The second focus is on developing a strong biofuels infrastructure. This is focused on ethanol mainly, with wishful thinking on cellulosic ethanol.

There is an overemphasis on corn ethanol which many people are debating as a fuel source. Sugarcane ethanol, the main ethanol crop in Brazil is much more environmentally friendly. I don't think it would be that bad for the American public if we had sugar shortages because it is being used as a fuel. It might even be healthy. There is a bit on importing ethanol from Brazil instead of oil from Venezuela. This of course is completely opposed to by the American farm lobby.

I think the book shortchanges biodiesel. Biodiesel in my opinion is a better source of fuel than ethanol. Biodiesel can be used in any diesel engine with minimal changes. Also biodiesel can be made from feedstocks like human and animal wastes, restaurant grease, and oil seed bearing trees all of which use much less land than corn or sugar cane. I am going to mention two companies in the biodiesel arena. Aquaflow Bionomics in New Zealand grows algae to clean up settling ponds, the algae then is processed into biodiesel. This is a double benefit for the environment. Another company is Cleanfuel Technologies. Algae is grown in a process where it extracts carbon from flue stacks. Then the algae is processed into biodiesel.
http://www.greenfuelonline.com/gf_files/GreenFuel%20Growth%20Rates.pdf
Hybrid diesel engines are also being developed. I think as a potential fuel source algae trumps cellulosic ethanol.

Cellulosic ethanol is discussed as the fuel of the future. There is a description where they plan to make every gas station have an E85 pump. E85, is a mix of 85% ethanol and 15% gas. I am not sure how they are going to do this. It is a nice idea, however, they have to pass the legislation through congress and senate. They can't seem to get the congress or senate to pass a 10% requirement for ethanol in gasoline. I am really not sure how they will do this. A lot of the big companies are already invested in FFV's or flexible fuel vehicles that can run on either gasoline or E85. General Motors has invested a lot of money into this.

Coal liquification is considered a good idea in this book. At least that was my take when I was reading the book. He says something different during the video presentation, that coal gasification is not so good. Maybe, I interpreted things the wrong way.
I am not a big fan of big coal. Coal accounts for 50% of our stationary energy use. Claiming that we will reduce global warming by investing in clean coal then sequestering the carbon dioxide in holes in the ground seems like a fantasy. I think there are other options for coal like the aforementioned GreenFuel Technologies. There is also cofiring with biomass. http://www.nrel.gov/docs/fy00osti/28009.pdf He says wind is simply not an option. I disagree with him. There is no discussion of diversifying the United States energy base with more geothermal, improved hydroelectric plants, solar power, more natural gas, and even nuclear energy. Diversification is essential, it is the best way to create a positive bipartisan energy policy.

The next section is about driving and highways. There is a brief statement that instead of putting money into roads, we should put money into mass transit. Also we should allow more telecommuting. Telecommuting at the level which he is describing would require a major change in the way most Americans think about work. Maybe if we put some money into better trains, things like the GE Hybrid locomotive http://www.freerepublic.com/focus/f-news/1840706/posts people might be more interested in mass transit. I love trains.

The ideas in this book are interesting. Many of them seem implementable, I'd say about half of them. This is far better than most political books which I have read.

He summarzies the main goals of his program for ending oil addiction. He even spends some time describing what oil addiction is. Then he creates a speech which reminds me slightly of Ronald Reagan's speaking style on how we should kick the oil habit.

Here is the summary of his ideas reworded in my own language:

1) Transform the vehicle fleet to PHEV-- plug in hybrid electric vehicles . Get the government to order a PHEV fleet.

2) Change the fuel supply to ethanol and other biofuels.

5) Create a gas tax to fund the changes as well as introduce a PHEV rebate for tax payers.

6) Change our diplomacy. During the video he mentions that we should cooperate with China in creating better standards. He implies that we should open our borders to Brazilian ethanol.

He describes his solution as a big government solution. Personally, it seems a bit too big government, but it is a better start than almost any other politician has come out and talked about. This is well worth reading if you are interested in energy policy.

David Sandalow is an Energy & Environment Scholar and a senior fellow at the Brookings Institute.

Posted by Book Calendar at 7:55 AM

This also is a good reminder to read Upton Sinclair's "Oil!" which is coming out as the movie "There Will Be Blood". Have you read this?

No, I haven't read read "Oil". The book which everyone reads by Upton Sinclair is "The Jungle." I might read it.

Excellent review and a great sentiment. The first economy to break reliance on the OPEC countries will reap great benefits. I just hope Australia beats the USA to the punch, sorry can not help but be patriotic.

Australia is doing some great work with concentrating solar power, solar heating towers, and is working on being the first to commercialize solar electrolysis of water into hydrogen and oxygen. I think they are way ahead of anyone else with this process.

Watched "Who Killed the Electric Car" recently (great documentary), then i heard that GM and Tesla are making another run at the electric car (yay for progress!) hopefully development of this technology can go on unhindered by the corporations that depend on oil consumption.