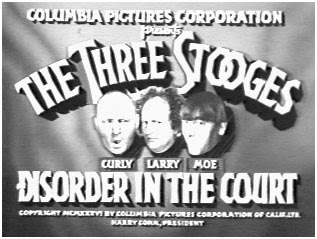 This is one of the four Three Stooges shorts that they failed to renew copyright on in the 1960's.

Sometimes, I have to stop reading because I have read so much during the previous week that I get information overload. Usually, I stop for one or two days so I can let what I have read gel in my head. I often do memory exercises to handle the amount of books which I read. Very basic eidetic memory exercises like the method of eidos.

The story of the eidos is that a Greek was at a banquet hall and he left the hall. Shortly after he left an earthquake struck and caused the hall to collapse. Eidos sorted out who was at the hall by systematically trying to remember the hall and the pillars which held up the roof. He would place different people next to the pillars to identify who was in the hall. Through this method of memorizing the location and placing people inside the location, he was able to identify all of the attendees at the banquet.

Memory was considered the fourth canon of rhetoric in ancient Roman times. It was considered essential to be able to memorize very long speeches because of the limited amount of written material available. As part of this it included the ability to have learned a wide variety of subjects as well. The combination allowed for very flexible speaking ability without reliance on cues.

Anyways, this seems to be a bit off subject. I watched a film today, Shrek the Third to let my mind rest and not read any books. I have also watched the first two films, Shrek and Shrek 2, I really didn't watch it to review the film. I watched it for the same reason people watch Abbott and Costello, The Three Stooges, or Gilligan's Island. To relax and zone out a little bit.

A lot of people come in to check out videos and dvds for this express purpose at our library. They want to see things which have no redeeming value as cultural objects but will help them relax and tune out. Things like the Merry Melodies Foghorn Leghorn, Ren and Stimpie cartoons, and the Honeymooners.

These things will never get high ratings, but many of them will be watched far more than some of our better art films. Low comedy rarely gets good ratings from reviewers, but that is not why people watch it. National Lampoons Family Vacation, American Pie, and Norbit have little if any redeeming value.

It is the same reason that children check out books of Knock Knock Jokes, Knock Knock Who's There? Lettuce, Lettuce Who? Lettuce in and you'll find out. Or people create faux book titles like The Yellow River by I.P. Freely.

It is the same reason people ask for Jason versus Freddie, people want an visceral experience at the basic emotional level which does not require a lot of thought. It took me a while to get this. I used to resent people taking out really awful trashy films like Bride of Chucky. The conversation might go:
Do you have Rambo?
Let me check. Um no.
Do you have American Pie, The Naked Mile?
Yes, we have American Pie, but there is a waiting list.
Place me on the holds list.
Alright. Can I have your card?
Here is my card. Do you have Bride of Chucky? that was such a fantastic movie, even better than Leprechaun.
Let me check. No, we don't have Bride of Chucky.
Wait, let me think. No, yes I remember what I want. I need "I Dream of Genie". That was such a great show.
We have I Dream of Genie Season One and Season One Two.
Place me on hold for "I Dream of Genie." Wait, I remember a show I used to really, really like. Do you have "Welcome Back Carter"?
No, we don't have that, can I suggest a show that just came in. We got the first season of Kojak.
Hey, that sounds wonderful, put me on hold for that.
Alright, you have reached your hold limit of twenty items.
Thank you so much for helping me.

I got angry enough a couple times to ask people why they wanted a string of bad B movies while I was working at the reference desk. The answer I got was "I just want to turn my brain off and relax." or "I have been thinking all week at work and I don't want to have to think anymore for a while." Or, the most reliable one, "It brings back memories, I like to remember watching these things on tv. It was so wonderful." Sometimes, people just like to come to the library to check out lots of films.

Another class of film that gets very little respect from critics are comic morality plays. These really do deserve a little more respect. They aren't about being artsy. Tyler Perry is a very good example of a person who writes films that are not critically acclaimed but have a positive message. Movies like Diary of A Mad Black Woman, Medeas Family Reunion, Why Did I Get Married?, or Daddy's Little Girls are not high theater, but they offer comic relief with a strong moral lesson, somethng missing from many of todays films.
Posted by Book Calendar at 12:54 PM

I grew up om The Stooges -- Moe, Larry and Curly, not Iggy. It is disappointing the heirs of their estate have not done a better job with their legacy, especially with DVD releases. I would gladly spend money on Three Stooge DVD anthologies. While they were mostly mindless slapstick, they did a few satirical shorts that hold up well. In particular, "You Nazi Spy" was a classic.

I rather like the stooges because they are very well done for mindless slapstick. They are the kind of thing which is good to watch with ten year olds.