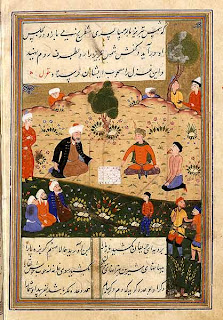 Rumi's poem dedicated to his friend Shams of Tabriz.

I have started reading Coleman Barks (Translation and Commentary), Rumi the Book of Love Poems of Ecstasy and Longing, (Harper Collins c2003). The poetry is far different than anything else which I have ever read. I honestly know almost nothing about sufism. Some of the ideas being expressed and symbolism are far different than the symbolism I am used to. For example the concept of wine as being one of the 1000 ecstasies, and the purer and the clearer the wine the more ecstasy there is is fascinating. Also to speak something is to evoke the image, when you speak the word rose it brings the image of the perfect rose, thorns and alls.

It brings to mind the famous line from the Rubayyat of Omar Khayyam,

" A Loaf of Bread, A Jug of Wine, and Thou" which has lots of very romantic connotations.

I read a poem called Breadmaking by Rumi it again seems to go back to the concept of the earlier poem. Breadmaking is about sex, a scholar passes by the caliph and the caliph gives him wine and the scholar ends up making love to one of the women in the king's harem. The act is described as the process of making bread with kneading the dough, adding the water, and filling the oven.

When you think of thou in Rumi, my impression ist that you think of friendship that allows Rumi to reach deep levels of inspiration. The friend allows one to have self-reflection and polish the mirror of ones soul. One does not see the person but the world which the person lives in.

I have read more of Rumi. It is truly eloquent writing. I am not sure that I can do it justice. The poetry is very touching and beautiful. It is beautiful because it is focused on reaching out to peoples hearts in every sense, both in the physical world and the spiritual world.

More important than the ideas is the feelings which come from the poems. Like many traditions of mysticism one of the objectives is to "close ones mouth" and "open ones eyes" to the world around you.

Some of the book reminds me that life is about accepting death. There is the concept of "die before one dies" which is very similar to the Hidden Leaves concept of the samurai, or "the resolute acceptance of death." A most striking image is described where the candle is only valuable because of the light it gives off as it burns down to nothingness.

Amazingly, this book is no longer available on Amazon. I am not sure putting my thoughts down in a review form would be the best way to describe this book.

In each chapter, before the poems start other poets and mystics are brought in, Basho-- the Zen Master, Emily Dickinson, Auden and others. There are 22 sections each representing an idea of Rumi with a few poems in each section.

Coleman Barks also wrote The Essential Rumi and The Soul of Rumi.

I haven't really finished thinking about the book even though I have finished reading it.
Posted by Book Calendar at 11:01 AM

I think you're doing a fine job with your review of Rumi :-)
I think he is a fantastic poet.
~JD

It has been both enjoyable and mind opening to read.

What an excellent review... bravo!

Rumi is such a great poet ... and the fusion between Coleman Barks and Rumi is amazing ...

For whoever is interested in Rumi I also recommend the hour-long segment in Bill Moyers's Language of Life series on PBS that Barks' work with Rumi was the subject ...