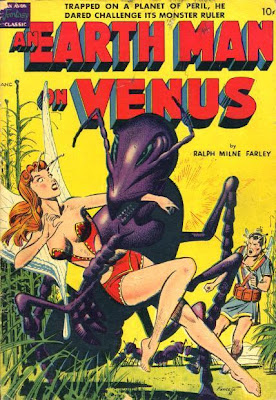 An Earthman on Venus (Public Domain)

I went to my local library and dropped off a few books. Then I picked up the 2007 copy of Comics Values Annual. I generally am not looking to find super expensive books. In fact, I try to find the quality stories that are still affordable. Books like Love and Rockets (The Brothers Hernandez) , Groo the Wanderer (Sergio Aragones) , Usagi Yojimbo (Stan Sakai), Ms. Tree (written by Max Allan Collins author of Road to Perdition), and The Official Modesty Blaise are still very modestly priced compared to comics in the same time period. They are also good quality stories.
What will happen with me is I will buy comics for the stories until they become way too expensive. For a while, I was buying the old Fantagor (Richard Corben), and Junkwaffel (Vaughn Bode) comics at reasonable prices. Now they are too expensive to buy at reasonable prices. This usually happens with a lot of the comics I buy.
I also like to buy comics for their writers. I am probably going to buy the Dark Horse comic, Dead In The West by Joe Lansdale because it is an excellent western horror story. I'll also be looking for the Eclipse comic, Seduction of the Innocent, and Eclipse comics version of Dragonflight by Anne McCaffrey. Even the reprints of the older comics like Cosmic Heros Buck Rogers are getting hard to find because they are affordable versions of very expensive quality comics.
I buy comics and I read them. Then I put them in storage boxes. I would have much rather read them than not. I am not going to wrap them in plastic and assume they are going to be worth a fortune later on. There aren't a huge amount of comics that I like.

I like Neil Gaiman and Alan Moore because of the writing. I want stories that are both well written and well illustrated. I like P. Craig Russell, Frank Frazetta, Berni Wrightson and many other artists who draw well. I don't want to spend a fortune on them either. I also like Frank Miller's superhero comics, especially his version of batman. I also like Osamu Tezuka's manga. I can be very picky.

I use Comics Values Annual or the Overstreet Price Guide to create a list before I go to a comics shop. There are so many books right now, that it is very easy to get distracted, and very hard to find what you want if you just wander around.