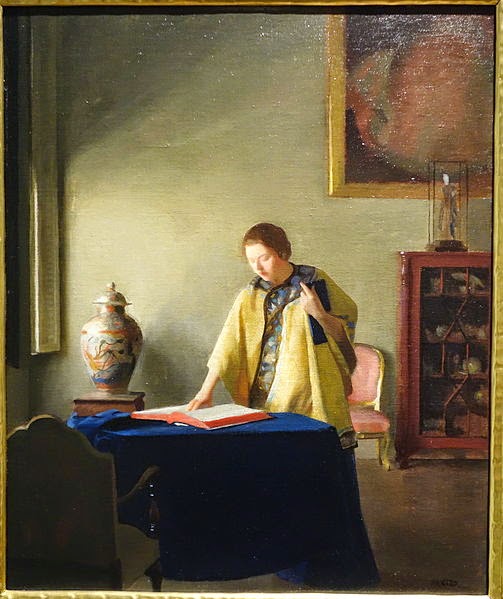 I finished reading Information Doesn't Want to Be Free Laws for the Internet Age by Cory Doctorow.  There is a line in the book which reads "Information doesn't want to be free-- people do" which is part of the essence of this book.  People want to be able to freely create different media without too many restrictions.  There are many arguments against digital locks and digital rights management in this book as well as a very open view on copyright.

I checked the gifts and the displays.  April is national poetry month.

On Thursday, March 26, 2015, The Brown Bag Book Club will be discussing the book, The Second Machine Age Work Progress and Prosperity In A Time of Brilliant Technologies by Erik Brynjolfsson and Andrew Mcafee.  This is an important subject.  I have been looking at some articles to show as part of the book discussion.


How Robots and Algorithms are Taking Over-- Review  of The Glass Cage Automation and Us
http://www.nybooks.com/articles/archives/2015/apr/02/how-robots-algorithms-are-taking-over/

The Future of Employment How Susceptible Are Jobs to Computerization
http://www.oxfordmartin.ox.ac.uk/downloads/academic/The_Future_of_Employment.pdf

I read a copy of the latest Times Literary Supplement.

I spent some time talking to a person about doing digital photography classes in May.

Tonight we have Karen Leahy doing an author talk about her book, The Summer of Yes: An Ex-Nun's Story from 7:00 p.m. to 8:00 p.m. in the community room.

On the way home, I read some more of The Mechanical by Ian Tregellis.  It is very much a story about free will and slavery set in an alternate history.

Check It Out The Race for ALA Presidency
http://www.publishersweekly.com/pw/by-topic/industry-news/libraries/article/65740-check-it-out-with-andrew-richard-albanese-the-race-for-ala-presidency.html

JP Porcaro's ALA Presidential Platform
http://makingithappen.me/?page_id=152
I met JP Porcaro at a couple different conferences including Urban Librarians Unite and Metro New York Library Council.  He seems to be quite sincere and straightforward about what he believes.

Posted by Book Calendar at 4:19 AM