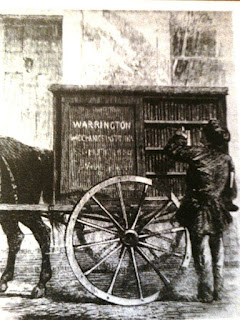 A picture of the first? UK mobile library on in Warrington which started in 1858

I finished reading Aurora by Kim Stanley Robinson.  This is an excellent novel.  It is about human beings first interstellar flight which takes a tremendous toll on the people who have take part in it. Over a thousand people need to be sealed up for hundreds of years to make an interstellar journey.  The ship itself has separate biomes from different places on earth.

There is constant struggle between different groups on the ship which almost results in civil war.  When the colonists arrive on Aurora, there is no guarantee that the people who stay there will be successful.  They all could die off.  The conflicts, the science, and the directions this story goes make it a much more human description of what it would really take to go to the stars.  A lot of people die in the story, and there is quite a bit of tragedy.

This book also removes a lot of romanticism about space colonization and goes into the gritty descriptions of what it would take survive such a long journey and how people would change.  I enjoyed reading the book.  It is hard science fiction.  The book comes out on July 7, 2015.  I was reading an advanced reading copy which I picked up from Book Expo America.

On the way to work, I started reading The Last Bookaneer by Matthew Pearl.  The book is about piracy of copyrighted works in England before there was an international treaty on copyright between the United States, England, and other countries.  There is a slightly romantic tones

I checked the gift books and the displays this morning.  I also spent a little time working on programming.  I went over some of the grants we might be working on in the future as well.

I have been checking the 100s in the mezzanine.

The people who are working on a documentary on the Doles Center are here again.  A few people have asked about the Kenneth Davis reading which is on June 18 from 6:30 p.m. to 8:00 p.m.  He will be discussing his book, The Hidden History of America at War.
I checked out the book Improbable Libraries A Visual Journey to the World's Most Unusual Libraries by Alex Johnson.  It should be entertaining.
I sent in my acceptance confirmation for the grant for Latino Americans: 500 Years of History.  I also printed up two copies of the grant to look over carefully.