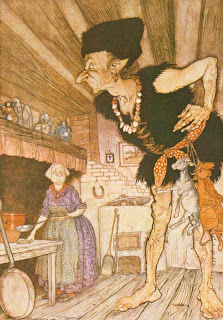 This is a modern fairytale set in comic book form. It is not for children. It has some adult content. It is part of the Fables series, there are some fifteen "graphic novels" in the series. The Fables series is about fairytale characters who have been forced into the modern world, driven out of fairyland by a cruel and evil adversary.

Jack of Fables written by Bill Willingham is of course about Jack, the violent trickster. He goes under many names Jack Horner, Jack Be Nimble, or Jack the Giant Killer. Jack had previously escaped to Hollywood where he made several blockbuster movies. The other fairytales caught up with him and drove him out of town. Now he is on the road. Think, "Hit the Road," as in Jack Kerouac.

Jack is captured and brought into a fortified compound for wayward fairytales, "The Golden Bough Retirement Community." There fairytales are sanitized and made mundane by the resident librarians. All their magic is removed. The head librarian is called Mr. Revise, the senior librarians who all wear glasses are Priscilla Page, Robin Page, and Hillary Page, there are assistant librarians, and junior assistant librarians. There is nothing quite like a wicked librarian to make your day.

The retirement community is of course a fortress surrounded by tigers, crows, watchtowers, and a razor wire topped fence. Jack being Jack plans his escape with the help of other fairytales and legends like the Tin Woodsman, Sam, Humpty Dumpty, and Goldilocks. You see all sorts of creatures and characters wandering through the story around, Alice, the Tortoise and The Hare, The Walrus and The Carpenter, and Paul Bunyan and his ox blue are just a few.

To escape Jack enlists the help of the fairies so they can distract the crows. The escape scenes are wonderful. A few spoilers are Toto gets eaten by a tiger, and Sam turns out to be Sambo, he takes care of the tigers in his special way.

I can't give away the whole story so I'll stop there. The comic book is quite enjoyable. The full color illustrations are quite interesting. This is not a childrens story, the naughty bits are not revised out. The illustrations are superb and often startling.
What I especially like about Fables is that there is an underlying subversive message about censorship that runs through the whole series. It is especially strong in this installment. The adversary is the embodiment of censorship and removing the darker elements from our common myths so they become soft and clean.
Originally fairytales were stories from the folk. Mother Goose included things like admonishing children to pray, not stay out late at night, and be prepared to defend yourself with violence. These things have been removed from these stories in America. They were childrens stories meant to scare people into behaving well. Here is a nice little Mother Goose nursery rhyem. There was an old woman who lived in a shoe, she had so many children she didn't know what to do, she gave them some broth without any bread, then whipped them all soundly and sent them to bed.
Many of the images in the original fairytales were racist, sexist, and erotic. It is hard for people to read the non-disneyified versions of Brer Rabbit, Mother Goose, or Anderson's Fairytales. Trickster figures were womanizers, con artists, and gamblers. They showed people the value of taking risks and winning. Goldilocks was not a sweet little girl and Jack the Giant Killer was not a nice guy. Puss In Boots was a liar and con artist. It is why we like them so much.

Posted by Book Calendar at 1:10 PM

My favorite of the odd things that happen in fairy tales was Rumpelstiltskin ripping himself in half at the end of his story.
How pissed off do you have to be to do that?

It is interesting. He stomped so hard a hole in the ground appeared then he tore himself in two.

My kids would be horrified! Makes you really think the difference in society now and then..!

Things have changed a lot for the better in many cases. However, there are some moral lessons being left out of many of the modernized tales. It is a matter of being selective in which ones you include.

I've read the first trade of the Fables series (the mystery about Rose Red) but I've haven't picked up the rest of the series yet. I really should.

I am looking forward to reading the other books in the series. It is very entertaining.