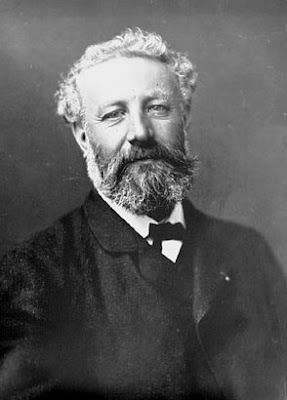 Jules Verne, a man who plays a prominent place in my imagination.

Good afternoon. Today, I have Thursday off because I am working this Saturday. I went grocery shopping this morning to catch up with the time I was sick. So, I didn't get a whole lot of reading or writing done this morning. I am about to have a cup of tea. I like to mix lemon zinger tea and chamomile tea. I find it quite soothing.

I'm going to watch a bit of V for Vendetta in a while and drink some tea. Later in the afternoon, I'll probably stop by the library to drop off some books which I checked out.

Sometimes, you get the oddest invitations on Facebook. On November 3, 2008 there is a literary spelling bee. It is a bit expensive for my tastes $75 and $250 for tickets. It is in New York, New York. Still, the attendees and supporters look quite interesting. https://www.clmp.org/spell/ .

I go under the name Charles Dickens on Facebook. It is a kind of joke. You are not allowed to use an anonymous name, and they would not let me be Jack Kerouac.

I was reading Twitter and found an interesting article from the New York Times on Urban Fiction. http://www.nytimes.com/2008/10/23/nyregion/23fiction.html?pagewanted=1&_r=1&partner=permalink&exprod=permalink

Urban Fiction is very popular in our library. People like Teri Woods, Zane, Noire, Michael Baisden, Omar Tyree, and Eric Jerome Dickey. They eat this stuff up. It is not my favorite. I have read Omar Tyree just to see what it is about. I like his writing. I'd say this is the next generation of street literature after Iceberg Slim or Donald Goines. Not all of this writing is about violence and drugs. Zane writes about sex, so does Michael Baisden. There is also a new subgenre, urban christian fiction which has a message. I haven't read any of it yet. It is just one of those things that nags at you a little bit.

Posted by Book Calendar at 9:11 AM